Mission:Explore is now available in the United States!

In April I wrote a blog post about Mission:Explore, our book which had just been published. I am very pleased to say that the book is now also available in the United States and is currently available on… Continue

We Gather Together and rememberance day

After the sign in for ‘We Gather Together’ we took a moment to talk about the day of remembrance and service and how VISTA is a national service program linking this national observance to our area.…

Getting Kids Outside – Connecting With Nature

When children and nature mix, something magical happens….Watch the video.

What a joy it was to share time with these children in nature…………Thank you! This event helped raise funds for children suffering from Cancer. The funds will go towards the …

learning from a thorn

there is an ongoing conversation between parents and a few teachers in one of our schools about not planting raspberries b/c they have thorns. i've provided them all w/ some friendly insights, wondering what others have to say about this... should be some fun discussions

What a perfect autumn morning in Alaska! We had an AMAZING turnout this
morning. We had 17 mamas, 1 grandma, 21 kiddos, 1 newspaper
photographer and 4 pups. It was a great hike, we probably could have
gone longer, but the bigger kids had a blast playing and snacking and
the parents had a chance to mingle and get to know each other. We
should appear in the Anchorage Daily News
sometime with in the next few days. …

Once again Mother Nature came and joined in the fun! It was super foggy when we began, but cleared up by the middle of the hike. We saw a long stretch of bear tracks on the beach! The kids all got a chance to play together and snack midway. Three new mamas and babes joined us! I counted 15 parents and 14 kids for a total of 29 participants along with 5 pups.…

What would you do with this space?

I wondered if you could help a couple of friends who have no pre-school experience and want to develop this outdoor space for visiting groups of 3-6 year olds. It's part of an outdoor education facility that is an old converted school.… 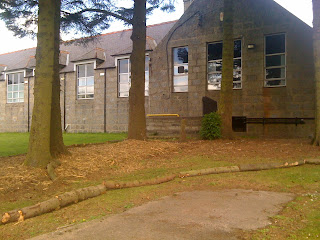 “How do you know but ev'ry bird that cuts the airy way
is an immense world of delight, clos'd by your senses five?”…
Continue

This is an excerpt from my blog over at http://www.playgroundhunt.com/blog/the-great-outdoors/. I just joined here and am still…

Snippet number seven from 'The Naturals', The Story of Rainbow'

Here is a snippet from 'The Story of Rainbow':

'As Sam and his family bundled into the car, he looked up at… Continue

Snippet number six from 'The Naturals', The Story of Sunny'

Here is a snippet from 'The Story of Sunny': WOW! We are quickly approaching 1000 members on this network!

Time to make a member challenge to reach this milestone. Let's find more like-minded folks who care about connecting our kids to the wonders of nature and get them on board.

A few options of places to…

Fishing out the real 'Big Society' in Britain

Despite the Government’s best efforts to sugar coat the harsh reality of the country’s financial situation, the idea that the ‘Big Society’ will offer a meaningful solution is proving a bitter pill to swallow for many people. Only time will tell whether phrases such as “the Big Society - a smoke screen masking impending deep cuts” materialise into anything other than…

Does anyone know of any Outdoor Nature Pre-Schools that are

located in Ohio?? I have been reading about them on this

blog and am very intrigued. Thanks, Colleen

Sundays this beautiful are rare during Nebraska Septembers, so son Duncan and I seized the day to head out on a little road trip adventure. Our destination: Ashfall Fossil Beds, near the town of . . . well . . . near nothing, really. It’s in northeast Nebraska, pretty much in the middle of nowhere. But for lovers of ancient nature, it’s the epicenter of the midlands.…

Taiga Trekkers - Hiking with Little Ones

Another huge turnout for Taiga Trekkers! I counted about about 32 participants (parents and kiddos combined). Conversations ranged from how to say "no" to your toddler, sleep, nursing, and first teething experiences. Children ages varied from 3 months to 2 years. Many of the mamas were hiking with two kiddos in tow or are pregnant with number 2. Networking was happening, friendships deepened and bonds forged... all while ambling with our little ones…

"If we want children to flourish, to become truly empowered, then let us allow them to love the Earth before we ask them to save it." --David Sobel…
Continue

Children and Nature Give Joy to All

Getting kids outside and connecting with nature couldn’t be more FUN!

Upon arrival the girls were spotting all the Butterfly Girls hanging in the trees.

Once everyone had arrived I handed out some chalk and asked the children to draw their favorite animal, bird or…

More on the moon

A while back I did a series on Moon Watching at my TheNatureSchool blog. Yesterday I learned that Texas Tech and others are doing a moon study that is gathering 4th-8th grade students from around the world to make observations and contribute essays about their observations. You can read more about the study here at the World Moon Project site. They are requesting students register by Oct 8th. Details on… Continue