love I love skunk cabbage. It is one of my favorite signs of spring. As a child, I would carefully navigate the edge of brooks and swamps, making sure not to step on skunk cabbage plants. It was fun to be a bit scared of the potential stink, though the fear of the smell was worse than the smell itself.

Each year, as the light changes and the air warms, I…

K-12 Outdoor Education in Tillamook Oregon: a model for the nation

Check out this tremendous program from a small coastal town in Oregon. You will be blown away.

What We're Doing in the Woods After School 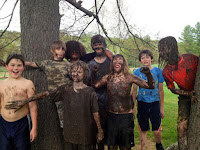 North Branch Trekkers is an outdoor based after school program for children in grades 4 through 8.  It is run out of the North Branch Nature Center in Montpelier, VT and meets every Thursday, throughout the school year… really, it is me and a bunch of kids goofing off in the woods.  But that goofing off is important and when done in a thoughtful…

Shadow Time at our Preschool.... It was one of those wonderful accidents...after making a winter collage to hang in our window, we noticed the shadows of birds at our feeder. We decided to replace the…

PLATEAU Conference – STEAMING Across the Plateau

Registration is now open for STEM Investigations for Sustainable Schools: Those wishing to obtain graduate credit from Lebanon Valley College can participate in the hybrid course which includes online coursework and a Saturday field workshop. Educators and Community members are welcome to attend the Saturday field workshops for free or receive Act 48 hours for a small registration fee. Sign up for one session…

December in the forest was dark and foggy. We had several of the coldest days so far, with temperatures in the low 30’s (Fahrenheit). Our teachers had to work diligently to make sure the children stayed warm. We also kept open communication with the parents about what clothing was working and what was not. Because children this age (2-5 years old) are so tactile, they kept wanting to take off…

Learning to Read in Nature

Learning About Air and Water Flow

Learning at a Dairy Farm

Although we had more rain this month, the temperatures stayed quite warm resulting in an explosion of mushrooms in the forest. The children were genuinely excited each time they discovered a mushroom and of course our teachers modeled their own authentic wonder and curiosity too. We…

The weather this month has been warm enough for many of the kids to strip off most of their layers including their footwear. It was only towards the end of the month that we began to notice signs of autumn. When we asked the kids how they knew the season had changed, they responded…

Children and Nature contributed to my Healing

I apologize that I have been so delinquent on my Blog posts. I was diagnosed with ovarian cancer last May and, after surgery, underwent 6 months of chemotherapy. I am finally finished with the chemo and it was grueling but the prognosis looks really good.

Now, I am back out in the forest with the forest kindergarten kids and it is supporting my healing immensely. Being in nature is profoundly therapeutic for me; and, I believe, for all humans. The slower pace of nature, the natural…

A Day at a Dairy Farm

A Day at a Dairy Farm

Step by Step with Autism I signed up my Boy Scout son for the hiking merit badge. It’s one of the merit badges required for Eagle rank. Because of my son’s autism, I don’t know if he’ll ever be able to complete all the Eagle requirements, but this checks off one that I was confident he could complete.

Hiking is actually an option – Scouts have the choice of completing swimming, cycling, or…