To compete teams of four will need to have 50+ yrs age distinction between the “Wee and Eldster” player. 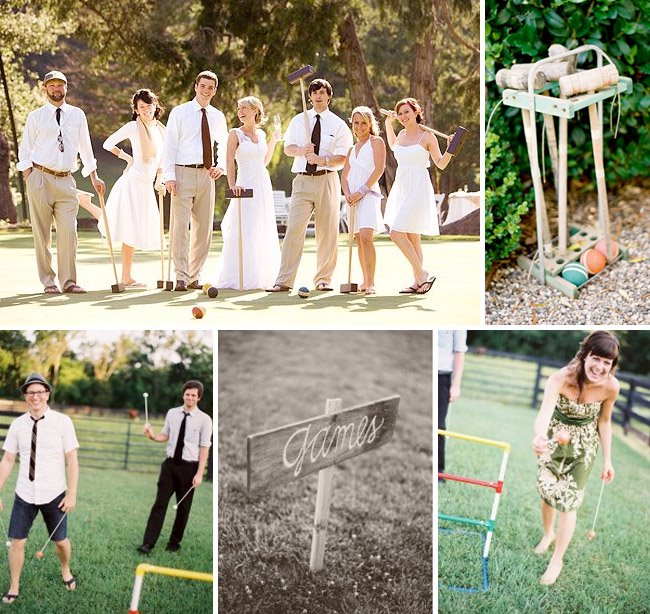 Lawn bowls (like croquet) can be pigeon-holed as sport of aristocratic antiquity.

As well something you might not consider getting into until you’re steering toward those legacy years of a less active later life.  These are, putting it directly, unfortunate stereotypes.  New interpretations (barefoot play and toe-croquet) and fusion activities (with disc golf) make “bowls and wickets” an emerging and ‘way cool’ healthy way to bring generations together 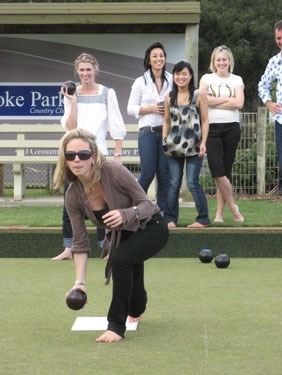 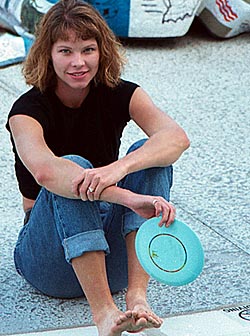 Bocce-Barefoot
The experience of playing with bare feet (no shoes or socks) puts you get in touch with the 'green' and your playful inner-child --as well as heightens your sense of balance and ability to roll even some of the “uniquely-weighted” balls designed to curve your pitch down the patch. 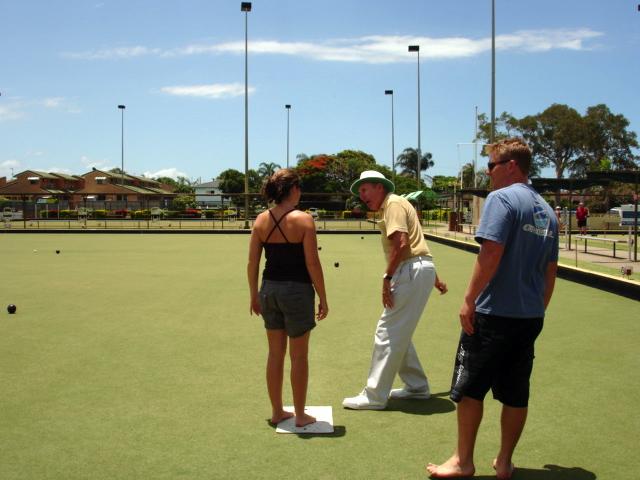 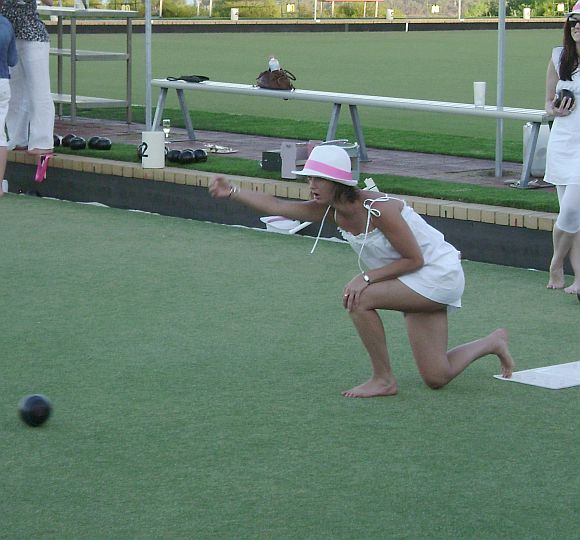 For instance, in Melbourne (Australia) a best kept family secret emerged in 2009:  seems 'BAREFOOT BOWLING' at Caulfield Park has become one of the most popular inter-generational/family events.  Lawn Bowling President Gary Hartmann said Friday evenings and Sunday afternoons are now devoted to barefoot bowling and this time period in the week has experienced a 23 percent jump in attendance.  Caulfield Park also encourages a family picnic experience by providing a sausage sizzle, music and a beverage bar at reasonable prices and, naturally, all the barefoot bowling equipment a family desires. The sport, which originated in Italy as bocce ball, has players toss balls at a smaller target bowl typically within the confines of a large court. The game is popular throughout Europe and in areas with a high concentration of Italian immigrants, including the United States.

Archaeological evidence suggests some form of bocce ball has been played for centuries. Stone balls for lawn bowling have been found in Ancient Greek and Roman sites, along with frescos and paintings depicting people engaged in bocce ball games. The game has remained popular for centuries because it is simple to learn, fun to play, and playable by all ages.  Adults and children can often be seen playing together.  Though, in Melbourne, its not just a toss with the hands.  Those differently-abled are actively encouraged to come and toss with their toes, says Hartmann. 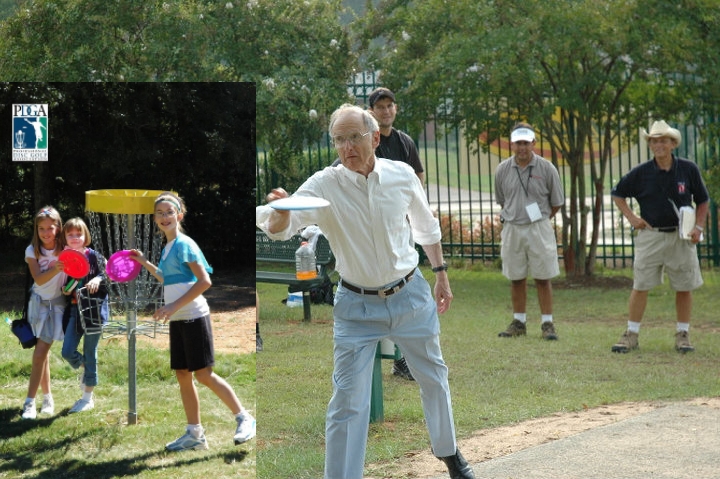 Disc Golf
Disc golf is played much like traditional golf.  Instead of a ball and clubs, however, players employ a flying disc.  The sport, formalized in the 1970s, shares with "ball golf" the object of completing each hole in the fewest number of strokes (or, in the case of disc golf, fewest number of throws).  The first disc golf association was established in 1975 and the PDGA now officiates the standard rules of play for the sport. It’s grown at a rate of 12-15 percent annually for more than the past decade, with 3,000+ courses (in operation/planned) in North America and over 3,000 globally.  The game is now played in over 40 countries worldwide, primarily in North America, Central and Western Europe, Japan, New Zealand and Australia.

Founder of the sport, Ed Headrick, described the intergenerational purpose of his professional organization this way: “[the] Disc Golf Association is dedicated to welcoming new generations of young and old into our sport, our parks, and our lives, with confidence and open arms.  Disc Golf is a simple game that makes no demands, has no limitations, and provides a mechanism that has changed many lives positively.”

Headrick coined and trademarked the term "Disc Golf" when devising the sport, and invented the Disc Pole Hole (the first disc golf target to incorporate chains and a basket on a pole).  The target concept was pivotal in anchoring the legitimacy of the sport and was borne out of a necessity to clarify scoring.  Headrick remarked to colleagues that he designed the target because he was basically tired of arguing over what counted as a scoring disc with his friends.

Disc golf courses are typically 9, 18, 27, or 36 holes long (two to a dozen acres) and almost all courses are free.  The sport offers a low-impact exercise requiring focus on mental strategy and provides an avenue for people of every skill level to play together. Disc golf is routinely found in resorts, state and county parks and on private property.  A disc golf course brings the local community out to the parks and attracts other disc golfers from surrounding areas. Dedicated disc golf players and disc golf clubs benefit the park system by taking up active roles in course upkeep and maintenance.

Disc golf, like lawn bowling and croquet can be point of entry exercises that ease generations into a higher level of fitness, health and engagement.  All three sports help build strength, stability and balance.  A pioneer for introducing women to the sport and 5-time PDGA Women’s World Champion, Juliana Korver points out, “the sport does not rely on size and strength.  Success comes more from timing and the angle of release, so both the young and the old have the same ability to succeed at the start.” Croquet
Like Disc Golf, is played both as a recreational pastime and as a competitive sport.  It involves hitting wooden or plastic balls with a mallet through hoops embedded into the grass playing court.

Also like Disc Golf, croquet wasn't formally organized in the US until the 1970's. But unlike disc golf, croquet players often found themselves competing with entrenched lawn bowling clubs over usage space.  Lawn bowls already flourished in the great age of public parks, beginning in the Victorian era in the UK and the British colonies -- continued with the building of America's urban parks around the turn of the 19th Century. The Industrial Revolution and the invention and wide manufacture of lawn mowers brought a consistency to grass surfaces that proved an impetus for all the lawn sports, from golf to bowling, to croquet and lawn tennis. Thus, with bowler culture in place for more than 100 years, croquet was seen as an interloper.

Two contemporary facets to croquet have changed mindsets and turf battles:  Golf Croquet and Toequet.  These games - developed and promoted at the National Croquet Center (NCC) in West Palm Beach, Florida* - combine the fun of backyard croquet with the spirit of Extreme Croquet.  And everyone can play.  The Pro at the National Croquet Center, J Archie Peck, a 7 time national champion and US Croquet Hall of Famer describes these two approaches as entry points that stand up well on their own right but also encourage players to be mentored by elders and masters to take on the complexity of the six wicket format.  An ambassador to the sport Peck along with instructors like Montgomery Byers guide players around a course that typically requires about a mile of walking and have had a tremendous impact on future generations of players through “free introductory lesson Saturdays” at the NCC.

was invented to allow people to use croquet rules and strategy on indifferent surfaces - on long grass, in parks, on hilly terrain, on the beach...even on Disc Golf Courses. You can play anywhere from a sand beach in summer to a snowfield in winter.  With anyone from an eight-year-old soccer fan to a croquet-loving mother-in-law. The more traditional but faster-paced golf croquet lets participants experience it as a combination of chess, billiards, putting and territorial challenge.  Each player takes a stroke in turn, each trying to hit a ball through the same hoop.  A hoop is won by the first ball to go through each hoop.  Unlike Association Croquet, there are no additional turns for hitting other balls. There’s also a sequence of play that remains consistent after a hoop is won.  The game winner is the player/team who wins the most hoops.

Golf croquet is now the fastest-growing version of the game, owing largely to its simplicity and competitiveness. Golf croquet is easier to learn and play, but requires strategic skills and accurate play.  Missy Diack, responsible for Public Relations with the Croquet Club at PGA National in Palm Beach County Florida likes how the game does not take long to learn.  Which makes it easy to introduce and teach to children.  A longstanding and reputable equipment developer and supplier, Don Oakley notes, “as part of the 'young grandparent' demographic, [he’s] tickled to be teaching & playing croquet with the students in local high school.”   He’s “also seeing with greater frequency, newspaper articles on school age kids forming their own croquet club.”

In addition to offering a fun activity through schools, therapy centers are now introducing the sport into their curriculum with an emphasis on facilitating social connections and offering a form of caregiver engagement and recreational respite.

A new program developed by James Creasey (called Jiminy Wicket) has just been licensed to SarahCare Adult Day Care to provide facilitated croquet as a catalyst for people to connect with their loved ones during the early challenges of Alzheimer’s disease and even in the post verbal silence and confusion this thief leaves in its wake.  It’s thought SarahCare’s use of the Through Hoops to Hope program can be seamlessly expanded to the relationship being formed with a local Parent’s Day Out/Pre-school program. This relationship allows seniors and toddlers to form relationships through physical activity like croquet, art and reading programs on a bi-weekly basis.

Creasey puts the concept this way:  “Jiminy Wicket creates connections and smiles for people dealing with dementia by playing croquet.”  He’s strongly advocating an intergenerational connection and is partnering with the Alzheimer's Association to bring the program to people all over the country and even other parts of the world.

This program will be featured Jan 27th (in a "Sport as Art" format) in Delray Beach at Old School Square and will be submitted for a Park and Rec Business (PRB) Magazine monthly topic:  Playgrounds & Recreation.

Format for the afternoon is as follows:

Plus, top two teams in each sport go head to head for the Individual Lawn Sport Recognition: