Sometimes there are days that I wish would never end. I want to savour the magic of the moment forever. It's hard to describe what makes a perfect day as these are always a unique relationship between the people, the activities and the places that they happen. 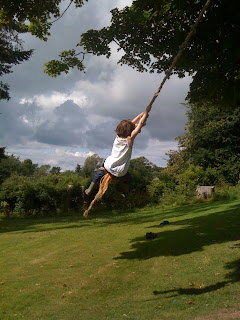 What a feeling!
My heart and head are still reeling from my time spent with the Nature Nurture project several weeks ago. This is a partnership programme between Family Support Projects and the local authority that aims to "provide opportunities for children from the most deprived areas of Aberdeen to have free play outdoors in natural environments. These children come from families affected by substance abuse, alcohol abuse, domestic violence and/or homelessness. They are Aberdeen's most vulnerable children."
For the past two years, the Nature Nurture Project has focused on pre-school activities, working with 18mths-5 year old children. Terri Harrison, one of the teachers involved, gives excellent presentations which explain more about the experiences and impact of this programme.
However thanks to funding from the Scottish Government's Go Play programme, the Nature Nurture programme has been extended for children aged 5-12. Unlike the pre-school programme, this takes place during the school holidays over a 10-day period. The children are picked up daily from their homes around 9am and stay the whole day.
The day began with an informal gathering where backpacks, waterproofs and wellies were issued. The rota for riding and leading the donkeys was announced to ensure every child had the opportunity to do both, each day. 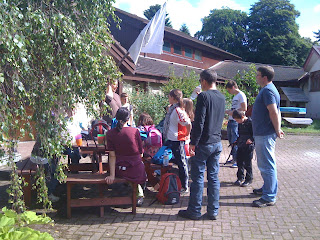 It was a short walk to the first play destination - a little man-made stream. Here, a variety of loose parts and props had been put out beforehand, for the children to use...or not! 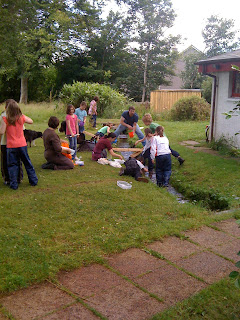 The stream provided endless fun. The children experimented with wooden guttering. This was set up by the children independently. I liked the use of the chicken coop... 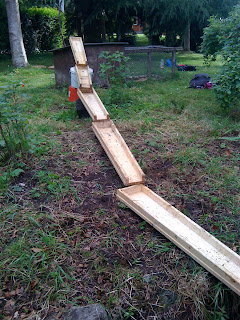 They learned how to find pond creatures... 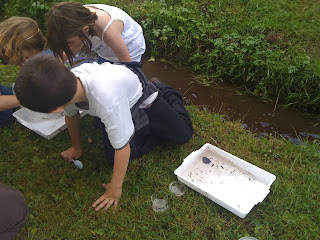 ...and made paper boats and watched them float through the pipe... 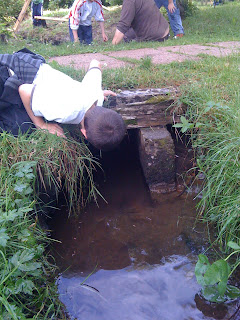 ...and had fun splashing around... 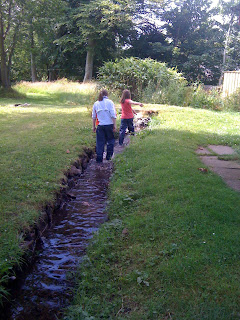 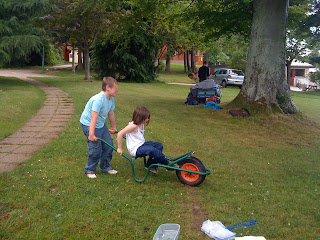 All very simple, unstructured activities freely chosen and self-directed. The adults sensitively supported and facilitated the play. Within the hour, all the children were noticeably settled and focused.
From there, the group moved to an open hill space. Nature Nurture operates from Camphill School Aberdeen which is a beautiful campus with a rich diversity of outdoor spaces.
Some children decided to have a game of football. Adults were invited onto the teams... 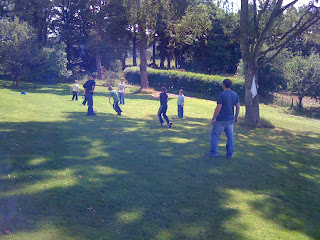 Others played on the rope swing attached to a mature oak tree. 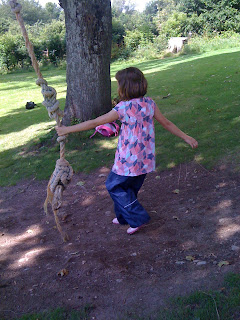 There was an opportunity to pick blackcurrants and raspberries to take home and eat. 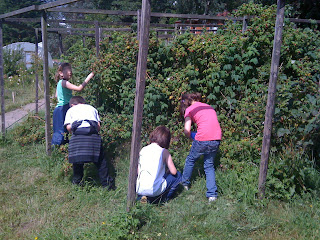 A popular activity was being wrapped up in the parachute and offered as a "present" to another child or adult who had to find out who was inside. 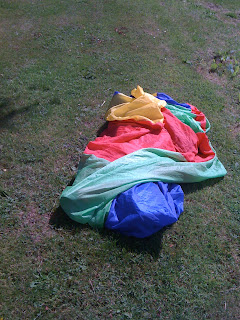 From here, the children travelled to their final destination. To get there, donkeys were used. The children had to help get them saddled up and ready to ride. 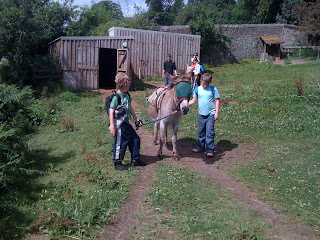 Lunch was a barbecue in the forest. Some of the children volunteered to chop and collect firewood. One child was assigned the task of lighting the fire. The children were also free to play and explore. They enjoyed looking at the horses in the nearby field, playing hide 'n' seek and tag. 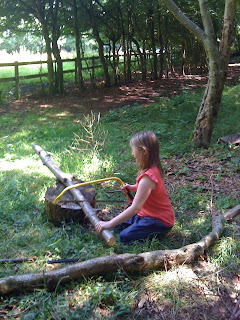 The shelters made on previous days were returned to and built upon. This child was unhappy with her seating and spent a long time finding a suitable stump. Then a mobile phone holder was made on a nearby tree! 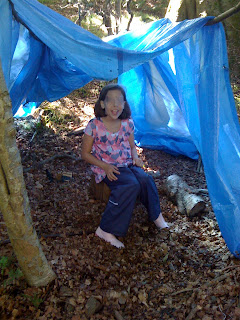 The donkeys were used to accompany the children back to the centre. At the end of the session, each child was given their own photo album of the project. Each one was different, with commentary and photos unique to that child. It was interesting to see the children's reactions to this. They all wanted a look at each other's albums and commented positively.
What I liked about this day was the relaxed atmosphere. The only structured activity was making bows and arrows in the afternoon. There were clear rules in place about being around the fireplace and using tools. The children took great delight in ensuring that the adults followed these rules too!
I liked how the children rose to the occasion and demonstrated very responsible behaviour. For example, one child had her mobile phone with her. It was not confiscated nor left at the centre. She sent and received one text from an auntie. At one point, music could be heard coming from her shelter. When I looked in, she and a friend were listening to a song. One song. For about 10 minutes. This reinforces my belief that digital technology need not detract from outdoor experiences.
In terms of the positive impact of this programme, one of the children told me his family were going camping for the first time ever the following weekend so that he could show his brothers what he had learned. Three years ago, I taught this child. I often talk about him when I give presentations, because he once told me "Good families don't go outside." Apparently they do, now!
This post is currently featured on my blog "I'm a teacher, get me OUTSIDE here!"