A hop, skip and a jump towards getting more children outdoors

The UK Government have launched their plan for ‘Olympics style’ school games contests to introduce more children to the health and personal development benefits of competitive sport, backed by £10 million of National Lottery funding. I’m delighted; a renewed focus on young…

I am moving house at TheNatureSchool to its own domain. You can see my most recent post, a lesson that you can use as a home school acitivity for science and language arts or art.

We are a sight dependent species. Although there are other species, and eagle for example, who could make our quality of vision seem paltry, we rely heavily on site. Further, in this technologically miraculous age, we often have gadgets in front of our… Continue

I know this road like the old friend it is; Kelley Stand it is called. It is a narrow dirt ribbon that twists and climbs into the Green Mountains of southern Vermont. Today it is in good shape; I’m cruising. But in springs long past I’ve driven it when the road strained to merge with the adjacent stream, and I needed the help of passersby to pull my hapless station wagon back onto dry ground. The locals don’t even try to keep this road open during the winter.

As a child, some magical… Continue

This is My Rock

We are ever so lucky that our preschool is bordered by beautiful natural bushland. We value the bush as a part of our learning environment, and take small groups of children out into it on (almost) a daily basis.

When I found a poem "This is my Rock" by David McCord, it instantly spoke to me of the feeling of ownership we are seeing in our kids after months, and in some cases a couple of years of exploring our bush trail.…

A Treasure Hunt! What's Out There? 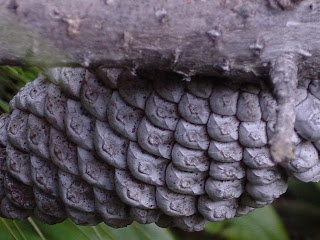 Good morning! This is my first time to enter something in the world of "Blog" so please don't get too excited and expect some grand introduction. HAHA! I'm just trying this out.

Hey Parents here's something fun to do with the kiddos!

Hey Parents here's something fun to do with the kiddos:
if you give a kid a camera...photo of the week. Check out “Nature’s Alphabet” photographed by Jasmine Hughes age 15. Can you find the
letter? If so, write your answer on http://www.visualizeaplace.com

Yet another survey highlighting our isolation from the great outdoors

How depressing it is to see another survey highlighting our growing isolation from the natural world (How we lost our way to the great outdoors, Harry Wallop, 9th June 2010, the DailyTelegraph). The findings of a survey conducted by outdoor equipment retailer Go Outdoors echo our research carried out among school… Continue

On Saturday April 3rd, a group of 15 young men…

The upcoming documentary about children and nature, Mother
Nature's Child, addresses the question of risk: what kinds of risks
are healthy for children, what risks help teenagers mature into healthy
adults, and what are the hidden risks of our technological age. When
most people think about taking risk in nature, we might think of
riding a wave, or scrambling up a rock wall, or doing a solo… Continue

The Secret Benefits of a Miraculously Muggy May Day

Some of the most remarkable things that occur on a Happy Trails Family Nature Club outing, happen as a result of our willingness to try new things, and one recent event was by far our most adventurous! In a St. Paul, Minnesota park, our group decided to attempt going deeply into a wood, down a steep embankment, into the (somewhat) unknown. We discovered that the area was greatly overgrown with huge burdock leaves, as well as strewn… Continue