At first glance, it seems a trophy pose, particularly as the boy in the photo is wearing an FC Barcelona jersey with the UNICEF logo.  So naturally, my soccer-loving son brought me this 2” x 2” photo and asked, “dad, is there a TV trophy for soccer, or a trophy for watching the most soccer on TV?”

He then produced a photo in the local paper of a boy scavenging electronics scraps at a dump in Ghana that was named the UNICEF Photo of the Year 2011.  The award, given to photographers whose work captures the personalities and living conditions of children around the world, was presented to Mr. Kai Löffelbein.  His winning image shows a boy at the infamous electronics dump in Agbogbloshie, (near the capital) preparing to throw a computer monitor to the ground to extract its material contents.

Eyes of a Child; Portrait of Stark Contrasts 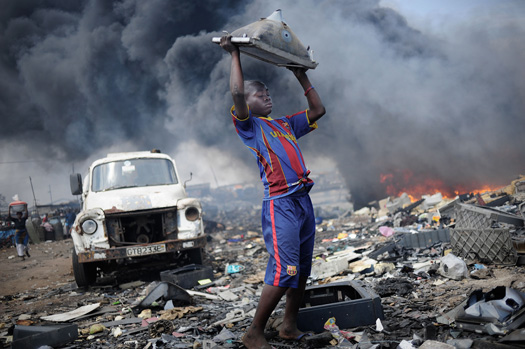 Upon closer inspection I pointed out to my son that this boy (about my son's age) is standing foreground to curtains of smoke, surrounded by the hazardous high-tech waste of industrialized countries.  These contrasts initially escaped my son, as he kindly confirmed, "Yes, that’s Barcelona.”

And, I thought about what we also take for granted, when we consistently promote nature -- to the extent that a “green-washing” sometimes narrows our vision to simply having our children appreciate parks and recreational areas we often have readily available.

The world produces million tons of electronic waste each year, and much of it is shipped to developing countries for disposal.  There, scavengers – many of them children – work in junk and dump-sites to recycle valuable materials from the waste.  They are exposed to lead, mercury and other hazardous substances and conditions in the process.

Mr. Löffelbein’s image captures the stark contrast between rapid technological advancement and its ruinous effects on the environment and the impoverished.   He notes out of the 800 or so that work at this toxic waste dump (the vast majority males), “more than half of them are children.”

Thank you, Mr. Löeffelbein, for reminding me to pause and reflect on a paradoxical angle of teaching about children and nature.

Not All Bad News: Contrast in Fair Trade

As it so happens Ghana is also the world's second largest producer of cocoa after Ivory Coast and cocoa is its largest agricultural export.  Kuapa Kokoo is a cocoa farmers' cooperative founded in 1993 and now represents over 45,000 cocoa farmer households. The cooperative formed Divine Chocolate, which now markets fair-trade, high-end chocolate products worldwide (established first in the UK, its subsidiary Divine Chocolate - USA was instituted in 2007) and owns nearly half of the company-- thanks to a generous donation of  "stock give-back"  by Body Works.

Established in 1997, Divine Chocolate has grown each year, allowing the farmers not only to enjoy personal success, but also to reinvest in their local communities by building schools, sinking wells for clean drinking water, providing mobile medical clinics for farmers in remote growing regions, and fostering projects to help women earn additional income for their families outside of cocoa season.

Since the farmers have an ownership stake in Divine Chocolate, they also have the opportunity to influence how the products are made and sold.  Having their voices heard means a lot to cocoa farmers who live in the Ashanti region of Ghana.  It is located near Lake Bosomtwe, in the Rain Forest Region about 250 kilometres (160 mi) (by road) northwest of Accra. Since its founding, Kuapa Kokoo has been able to enforce gender quotas for representation at all levels of governance.  Its current president, Christiana Ohene-Agyare, a cocoa farmer with an 11 acre farm was elected in 2010.  She heads up an organization which turned over nearly $50 million across the whole Kuapa Kokoo group in 2011.

In absolute contrast to the global graveyard slum of dead computing electronics in Accra, this region is popularly known as "The Garden City" or "heart beat" of Ghana because of its many beautiful species of flowers and plants readily available for children to explore.

Chocolate is one of the most delicious foods on the planet and has one of the oldest stories and documented information on its use, dating back thousands of years during which the Mayans cultivated the first crops of cocoa.

The associations for chocolate, such as weight gain and diabetes, are actually caused by the milk, sugar and other added ingredients.

The "Journal of Clinical Nutrition" reported a study that shows that eating dark chocolate
, Or its active ingredients, reduces a wide range of risk factors for cardiovascular disease.


More Benefits of Raw Chocolate
The levels of antioxidants in chocolate uncooked, flavonoids, are much higher as well as the preservation of vitamin C, Phenylethylamine (molecule naturally produced by our brain in the states of euphoria and joy), omega-6 fatty acids, tryptophan and serotonin .