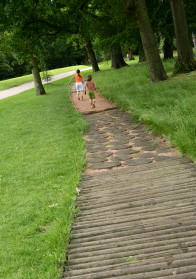 Britain's first barefoot park gives you a chance to play a healthy game of footsie ~~ in a sort of "playground for feet" nature trail.

Splayed out with a variety of surfaces, it's also been proven to boost health and vitality. The trail, a .6 mile (mere kilometer) route, is tucked away in a partly wooded area in the jewel in the crown of the Trentham Estate: the historic Italian gardens. One of the most impressive, significant and important garden projects in Europe. (A far cry from some 15 years ago when Trentham was a desperate place. Sir Charles Barry's monumental Italian Garden, built for the 2nd Duke of Sutherland, had essentially become a rabbit warren.)

“Sunny days,” notes operations manager Simon Johnson, “it's hugely popular with children and multi-generations of families." There is also facilities like lockers, foot showers and maps (of the trek and of the feet) to assist “all-aged tootsies” to get touchy-feely with nature. 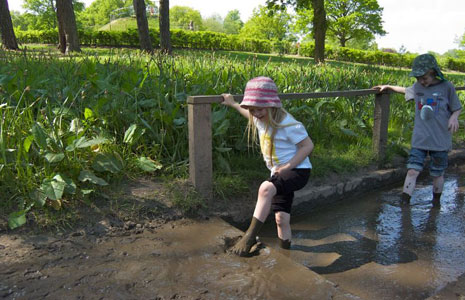 The textures on the trail, range across categories: from feeling downright good to and those that are high on the "yuck" and "ouchie~wowa" factor. Into the former fall logs that massage arches (bliss), a sloshy trough of less-than-warm water, timber bits laid out like dots, soft sand, hay, and a naturally warm burbling stream. But the pine cones, oozing mud and the pebbles take some getting used to. In about half an hour the loop is traversed and when finished the feet and body tend to feel airy and revitalized.

While some of it is naturally the effects of exercise and fresh air -- there's more to it than a shoeless scamper in the great outdoors. Officially the path is called a Barfuss Park. "Barfuss" is German for "barefoot", and the parks are popular in Germany and Austria. Sebastian Kneipp, a Bavarian monk, developed the concept in the 19th century. He is the founder of a natural health system called Kneippen (pronounced knipen), a kind of water-based blend of hydrotherapy and reflexology. Kneipp believed hoofing about barefoot on wet grass or in shallow water stimulated the internal organs, strengthened the immune system and helped the body to heal itself.

"I see the trail as an inexpensive form of self-reflexology, fun and a way to get back to nature," says Thomas Reitz, a co-investor in the Trentham Estate, who along with his brother Willi is the inspiration behind the sensory stroll. And, he isn't the only one: since Trentham's Barfuss Park opened nearly 4 years ago, more than 85,000 people stopped by. Reflexologists (who get the rub) say rubbing the feet in certain areas (believed to correspond to different parts of the body) can provide symptom relief for a host of medical conditions generally seem supportive of the idea.

"Experiencing the sensation of different textures, and wading through streams in your bare feet can only make you feel invigorated, especially as each foot has more than 7,500 nerve endings and 26 bones, making it a very sensitive part of the body," says Jane Long, a reflexologist.

A general boost to well-being Hugh Rooney, a reflexology lecturer at Napier U. in Edinburgh, gives the idea a more cautious thumbs-up: "The barefoot trails are a good thing, providing they don't risk injury to the foot. They can help to relieve tiredness and provide a general boost to wellbeing, but people who suffer from degenerative bone conditions, joint instability and diabetes [which can lead to sensory loss, and, in turn, make sufferers more prone to foot injuries] need to exercise caution," he says. 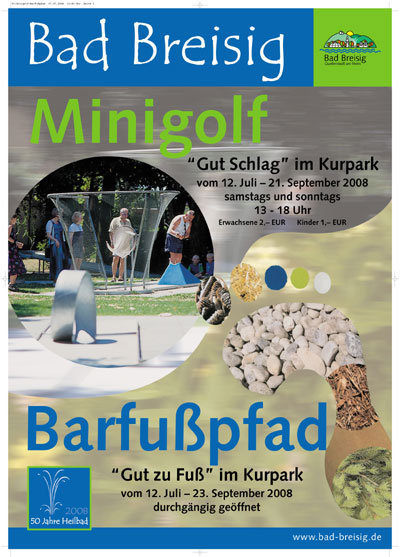 Randy Eady, a US-based rehab. specialist, Intern'l Council on Active Aging member and practicing pedorthist, has designed both unique barfuss treks in Europe (currently formatting one in Kassel, GE) and was a consultant on the first reflexology path in Florida (placed in the medicinal garden at Nova Southeastern University near Fort Lauderdale). He is an affiliate of Generations United and a “Generations Manager” -- building bridges across age-spans and facilitating a better understanding of the diverse make-up of older active adults. He created a mini-golf barefoot path near a Senior Living Center in a small resort village on the Rhine (Bad Breisig) so grandparents and grandchildren could interact in the out-of-doors -- barefoot, naturally.

As an Expert Panel member of the Falls Free™ Coalition of the Home Safety Council he likens the feet to antennae for the body. Offering a distinctly Western quantitative science report for his reasoning: a random control clinical study in the Journal of the American Geriatrics Society which reported walking reflexology paths three times a week, for 30 minutes a session (over 16 weeks) can regulate blood pressure and improve balance. (1)

To underscore his recreational therapy philosophy, he also highlighted a recent report about how behavior may change when fun is the message. The Journal of Consumer Research (Aug 23, 2010) described two studies that had participants perform tasks. If people perceived the task to be fun, they exhibited self-control. If they perceived the task to be more like work, they were less likely to exert self-control. “These results show low self-control people can be made to act like high self-control people and show regulatory success if tasks that involve exerting self-control are framed in a way that people will perceive it as fun and not work,” the authors concluded.

In this way, Eady says, "the barefoot mini-golf speaks to that fun factor, and is a form of recreational balance training that provides players the fun -- for instance, of the wii balance board -- yet does it in the richly 3-D space of the outdoors."

This is a nice reinforcement for research from the American Academy of Pediatrics, which released a study in 2007 that advocated unstructured play for development of critical thinking. Further buttressed in 2009 by the Alliance for Childhood (a Washington DC-based, play advocacy non-profit foundation) that declared the loss of children's play a public health issue. The Alliance went on to recommend that 60 minutes of free play each day, preferrably outside, would be most vitalizing.

No one argues the vitality-boosting aspect of these trails, but could the stimulus of a foot fitness course be a substitute for reflexology? "A skilled reflexologist will work the whole foot and pay attention to specific organ reflexes. They will also vary the pressure to the reflex areas depending on the client's tolerance and the desired clinical outcome,” said Patricia Grude, a certified reflexologist (with the American Reflexology Certification Board) who practices in Delray Beach, Florida. Grude points out, “only the sole of the foot makes contact with these types of trails." She adds, “though, they can certainly augment reflexology. Sort of like reflexology homework.”

Grude points to research published in a Swiss journal, Research in Complementary Medicine, in 1999 and 2001, which suggests that applying pressure to the feet can effect a tangible physical change in the body. "In the two studies carried out, intestinal and renal blood flow respectively increased following stimulation of the corresponding kidney and small intestine reflex areas on the foot but not when adjacent reflexes were stimulated."

Whatever we may think in the West, in parts of Asia, medically-therapeutic reflexology paths have been around (and incorporated in gardens for thousands of years. "They're a prominent feature of life in China and Taiwan," says Grude. In Malaysia, a luxury resort off the west coast beautifully installed one in its spa and encourages use by both guests and staff. In Japan, cosmetics giant, Shiseido has built reflexology paths for its staff as well. 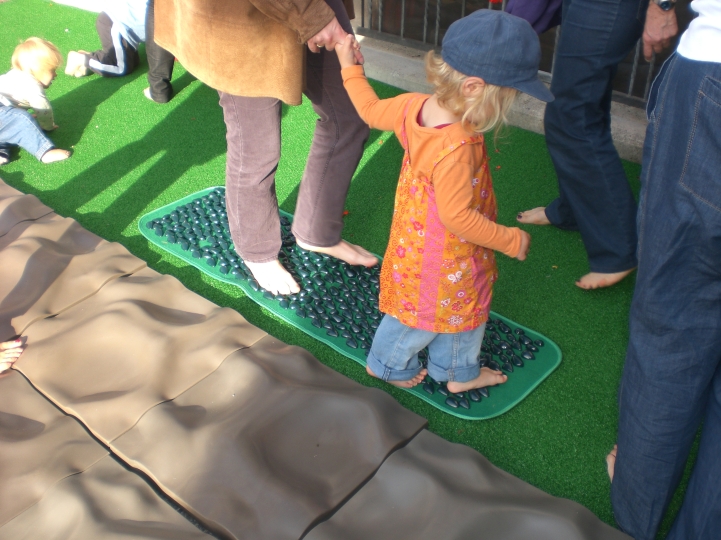 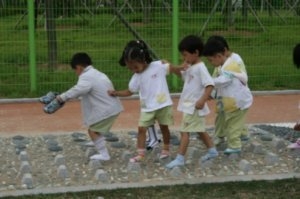 Reflexology paths are as plentiful as football fields in the Far East. In Hong Kong elderly Chinese people walk them regularly. They say it detoxifies their body, helps to ease aches and pains, and promotes longevity. They may tread the path every day, for up to an hour a day, as a meditation walk. It is surprising to watch the ease with which they tackle the sharper stones -- much like the young children do. Proving the point that “grounds can be played on” by feet (2 or 4) in all manner of age, shape and size. ~~~